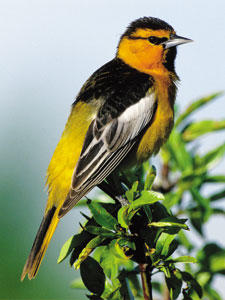 The Orioles are here! No, not the baseball team, though they also can be seen occasionally. It's the Bullocks and Hooded Orioles, who arrive this month. They are looking for a place to build their nests (tall palms are a favorite) and to find nectar and/or fruit, their favorite foods. You can put out an orange nectar feeder to entice orioles to your yard, as well as grape and berry jelly. Then you can have their bright color in your yard all summer.

Left: A Bullock's Oriole rests on a branch

Earth Day, April 22. Watch for many activities around birds that day.

Project FeederWatch ends this month. It's not too late to sign up and count a few birds for this important citizen-scientist project.

Below: A tiny Black-Chinned Hummingbird hovers near a feeder 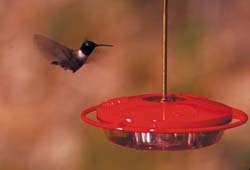 Black-chinned Hummingbirds are arriving this month and will be here through August. The heads and chins of the males are dark, though the throats sometimes show purple in the right light. The females are mostly gray with a hint of buff and white spots on their tails. Put out your nectar feeders and you might see one mixed in with our local Anna's and Allen's Hummingbirds.

April is nesting time, and you can help busy bird mother by putting out pieces of string on branches or on your now-empty suet feeder cage.

April is a good time to view shore birds, many of whom are decked out in breeding plumage. The California Brown Pelicans add bright poppy-red to their huge pouches. Combined with their lemon-yellow necks, the vivid palette helps attract mates. However, the colors fade as they begin nesting and incubating eggs. The Channel Islands, specifically Anacapa and Santa Barbara, are critical breeding locations for this iconic California shorebird.

Below: A flock of Black Skimmers takes to the air by Larry Naylor

Closer to home, in local estuaries such as Ballona Wetlands and Malibu lagoon, the Black Skimmers put on a color show that belies their name. The bright orange beak and orange feet contrast with their black wings and white underbelly, making quite a show, particularly if a large group takes to the air together.

Just as the Hermit Thrushes are leaving, the Swainson's Thrushes migrate through, headed for breeding spots north of Point Concepcion. But, though you may hear their sweet stuttery song (Listen here),  you are unlikely to see them. These plump russet-brown birds with spotted brown-and-white breasts rarely show themselves, but you can enjoy their song for the few months they visit us.

Below: American Goldfinch amid flowers

Unlike Goldfinch in other locations, the Lesser Goldfinch in Southern California don't migrate. Even the brilliant yellow American Goldfinches, which sometimes head to the cooler mountains to breed, usually are around in local neighborhoods. A Goldfinch flock might take off for a few weeks, if there is a native food source maturing in wilder areas. But they soon return, eager for the nyger and sunflower chips in feeders.

Below: A Tree Swallow preens on a twig 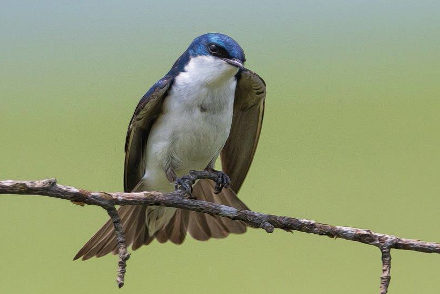 Swallows are the top guns of the bird world, spectacular aerialists who swoop and dive in pursuit of bugs. April is when they migrate through our area with some staying to breed. A flash of blue or green reveals a Tree Swallow or its cousin, a Violet-Green Swallow, both of whom now begin to scout nesting sites. Like Bluebirds, they are looking for a cavity, such as a box, though they need a somewhat larger space than bluebirds. Visit the Tree Swallows (https://treeswallows.com/tres/) web site for how to build a Tree Swallow box.

The s[ring meteor drought ends with the Lyrids, which start April 16 and hit their peak April 22. The moon will be waning, but they will be viewed best in the early evening before moonrise.