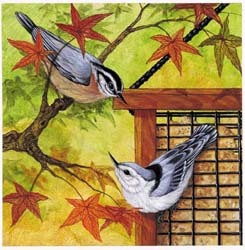 It's the coldest month of the year with long, even-colder nights. Now is the time to give our over-wintering birds a few extra calories. The best way to do that is with suet, a sort of bird peanut butter enriched with extras, such as ground worms, for protein. Suet comes in cakes or as a soft butter that can be smeared on tree trunks. Larger birds, such as woodpeckers, scrub jays or nuthatches, are big fans of suet, but also the little guys, such as bushtits and warblers will go after it, especially if it includes worms.

With all that rich food in suet, keep your water sources full. Even with occasional rain, local birds still need a reliable source of water.

Watch carefully if you still are pruning bushes this late, because our local Hummingbirds, the Anna's and the Allen's, already are nesting. The first round of Hummingbird babies will be fledging by the end of the month. Keep your nectar feeders full and, if you can, put out some slices of banana in a dish to attract fruit flies. They are the food of choice of Hummingbird mothers, who have to give their babies lots of extra protein.

Project FeederWatch continues. FeederWatch is the largest citizen-scientist effort each year to count bird species across the country. Join the project ($18), pick a day and time each week to watch your (or someone else's) feeder, and report the results. You'll be helping with many efforts to protect birds. 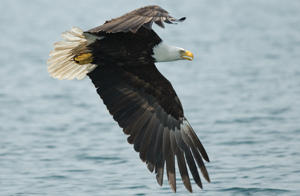 Large raptors begin nesting late in the month. Excitement builds as the local Bald Eagles in Big Bear and on the Channel Islands (many with 24/7 cameras on their nests) put the finishing touches on their nests before laying eggs. Some have laid clutches as early as January, though most are laid in February. Count 35 to 38 days from when the eggs are laid, and watch for the “pips,” the first tiny holes pecked by chicks when they are ready to hatch.

Left: A Bald Eagle displays its prowess at hunting fish

If Goldfinches haven't been around your feeders, this is the month when they show up in force. They love nyjer, the thistle seed that is their special diet, but they also appreciate tiny chips of sunflower seed, such as can be found in finch blends. 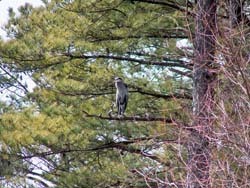 Great Blue and other herons and egrets begin nesting this month. Great Blue Herons and Great Egrets don't seem to mind living near humans if the conditions are right, as they are abundant on the Venice Canals and Marina del Rey neighborhoods, as well as Malibu Lagoon. Nests usually are built high in trees close to the water. Though they can stand in water for hours while fishing, they also hunt small voles on the shore.

Right: A Great Blue Heron peers at passersby from the safety of a tree. 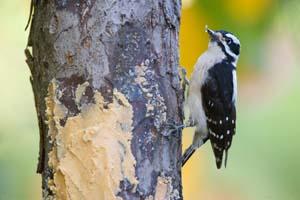 Downy Woodpeckers often can be heard drumming and drilling, especially on wooden power poles. Their sound is almost industrial, and you might think that someone in the neighborhood is using a small jackhammer. You can quiet them with suet, which is, not only softer than a phone pole, but also full of nutrition that they need this time of year.

Our current rains don't seem to have dampened the enthusiasm for the Morro Bay Birding Festival, which takes place each year on the Martin Luther King  holiday weekend. This year the festival features 160 events over 5 days, such as classes, cruises, hikes and workshops. Morro Bay features panoramic views of the Pacific and a federally protected estuary. More than 200 species commonly can be sighted. Youngsters are encouraged to attend, and fees can be waived for those under 17.

The Quadrantid Meteor Shower peaks overnight between January 2 and 3. Frequently, as many as 60 falling meteors per hour can be seen.