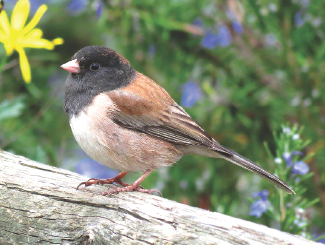 Dark-Eyed Juncos are hardy little birds, sometimes wintering in the mountains. But, they also are happy to enjoy the gentle weather of coastal Southern California, particularly in the summer, when they are nesting. As they are ground feeders, you may be more likely to see them under, rather than on, your hanging bird feeders. They will do a good job of cleanup, especially when they are feeding a clutch of nestlings. If you get too close to the nest, you will hear a barrage of little clicks, their alarm calls.

If you hear a series of repeated beeps at night, like backup alarm, don't look for a delivery truck. You're probably hearing a Saw Whet Owl, which has been reported in the Pacific Palisades area. While they are seen mostly above 5,000 feet in the San Gabriel Mountains, a few will appear in the lowlands on occasion. They also have become established on Santa Catalina and Santa Cruz Islands. 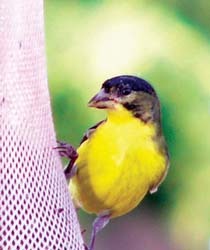 With so many nestlings now becoming fledglings, your feeders may become rather crowded. Many local residents, such as House Finches, bring their kids to the feeders as soon as they can fly.

Another bird with greater numbers these days are our local American Crows. Not only do they have new fledglings, but also the juveniles from last year and, sometimes, from the year before, still are around and helping with the nest. Crows are omnivorous and will eat almost anything you put out for them. Dog kibble is very nutritious for the young ones as well as the parents. 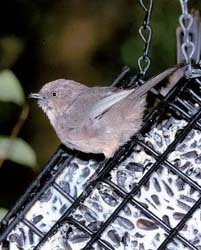 Most Bushtits are wrapping up breeding and starting to form small flocks of one to two dozen birds. Tiny, plump gray birds (4 inches) with long tails, they now will arrive at your bushes in numbers, eager to provide their bug-cleaning services. You don't need to do much except leave them alone, unless you have a big supply of aphids.

Left: Bustit on a suet feeder

Brown Pelicans, Southern California's iconic shorebirds, return to the mainland after the breeding season on the Channel Islands. Pelicans dive from 10 to 30 feet above the water to scoop up fish in their big pouches. Also returning from the islands are the sleek black Brandt's and Pelagic Cormorants, who sometimes form massive flocks if fish are present..

The North American Butterfly Association (NABA) National Butterfly counts are gearing up. There is a local count in Palos Verdes and another centered in Cerritos. For more information, visit the organization's count web page (https://www.naba.org/butter_counts.html). The organization is forging on after ending up in the cross-hairs of the culture wars. The NABA National Butterfly Center, in Mission, Texas, is on the banks of the Rio Grande. The group resisted efforts by Steve Bannon's conservative group, We Build the Wall, to build a private wall across its property. Soon conspiracy theories, such as that the center was part of a child-trafficking ring, brought angry conservatives to its doors. After a couple of incidents, the center decided to close and sued Bannon's organization and other associated groups. The suite will pay our this fall and winter, as NABA tries to defend itself.

The big meteor show of the year, for many, is the August Perseids. But they are preceded by an even longer show in July, the Delta Aquarids, so named because the appear to emanate from the Aquarius constellation. You'll see the Aquarids starting July 21 to their July 28 peak when there is only a new moon. They continue on into August, when they combine with the Perseids. This might be a good year to check out the Aquarids, because the Perseids will be up against a full moon at their July 11 peak.