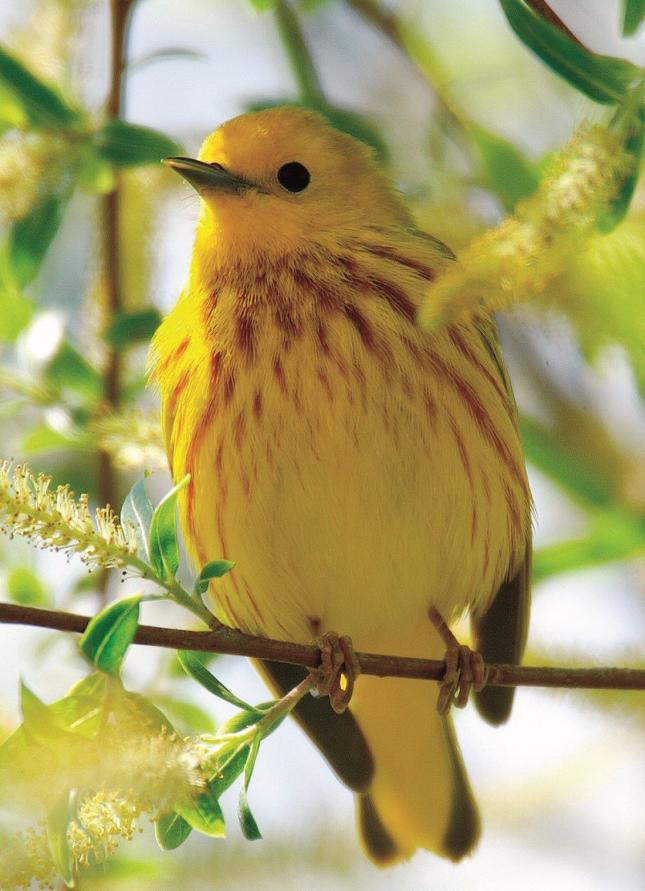 The sight of a bright Yellow Warbler helps make up for the fact that the days are getting shorter. On their way to western Mexico, these plump little birds come through Southern California looking to glean as many bugs as possible from your trees before continuing on their journey. They often work high in the branches, but may visit lower, if a fruit tree is attracting insects. They are just one of a crowd of Warblers who make Southern California their winter home, and all are enthusiastic worm eaters.

Right: A Yellow Warbler pauses on its migration to Mexico 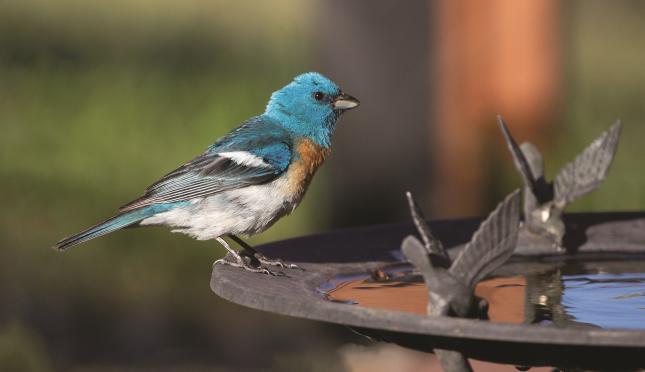 Keep an eye on your birdbath and yard for southward migrating Western Tanagers and Lazuli Buntings. Not just a pretty face, these multicolored beauties also are stout seed crackers and eaters, as their sturdy bills show. DNA studies suggest that they are related to Grosbeaks, known for their seed-crunching prowess

Left: Lazuli Bunting at a birdbath

In late September, begin watching for Sparrow migrants, such as Chipping Sparrows, who come down from the mountains now for warmer back yards. They have distinctive faces with a black line through the eye and a bright rusty cap. They show up in flocks of 10 to 50 on big lawns, sometimes mixed with the local birds, who are here all year, such as Dark-Eyed Juncos and Yellow-Rumped Warblers. 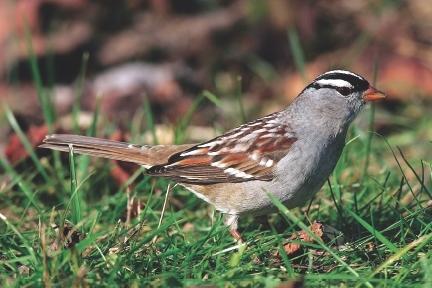 The White-Crowned Sparrow is a familiar and beloved winter migrant. These efficient ground gleaners show up under your bushes as early as September, showing off the distinctive black-and-white racing stripes on their heads. After their long journey from the Alaskan taiga, they are more than grateful for the seeds on the ground under your feeders.

Left: A White-Crowned Sparrow patrols the grass, looking for bugs

Watch for the last of the Orioles, mostly females an juveniles. Most males have taken off by early September, but the females stay with the juveniles, who need to bulk up before their first long migration to southern Mexico and Central America.

Below: An Anna's Hummingbird hovers by a nectar feeder 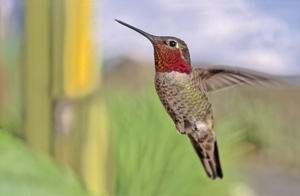 Hummingbirds are still active now, but their breeding season is almost over. Nevertheless, hold off on trimming your bushes until October, when there will be no babies in nests. Even then, watch carefully for nests, because hummingbirds will use the same nest for years, if it is left undisturbed. They have just a couple of months of rest, however, because they begin their nestorations in December.