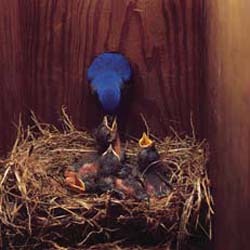 If your feeders seem more crowded or louder than normal, it's probably the baby birds just learning to fly and following their parents to your feeders. Like kids of all kinds, bird fleglings get their parents to feed them by making loud noises incessantly. You can see them perched near their parents with their mouths open, begging relentlessly for just one more worm or seed, even though they almost can feed themselves.

Left: Almost ready to fledge, these Bluebird babies soon will follow their parents outside 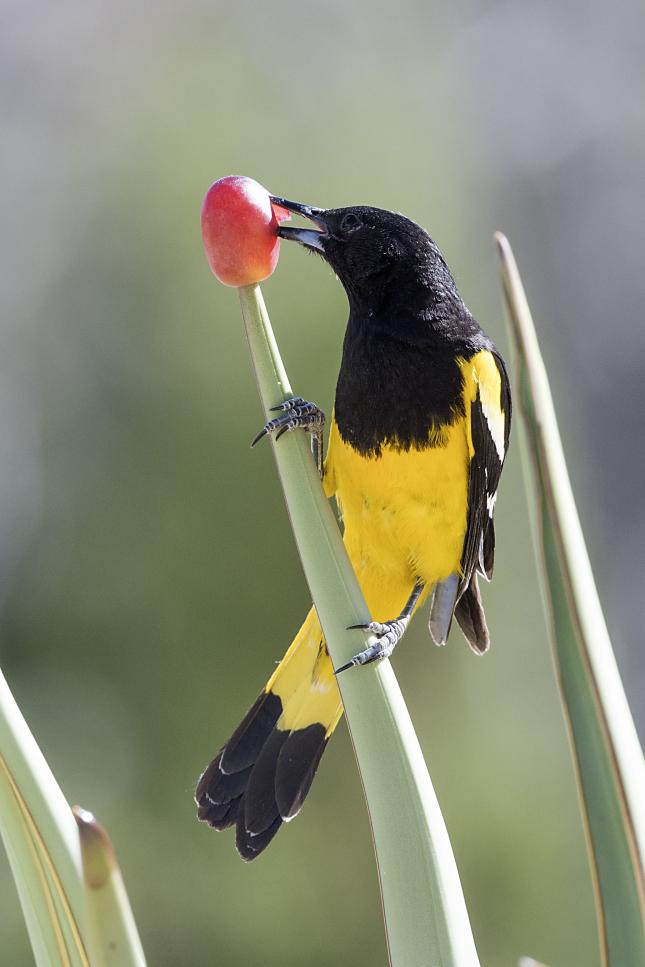 If you have been lucky enough to have Bullock's or Hooded Orioles nesting in your yard, watch now, as they are bringing their young to your nectar feeders. The youngsters still may perch close to the nest for the night, but during the day they will find perches with a good view of their parents. That way they learn how to go to feeders for nectar or Bird Berry Jelly. If you live near the desert, try spearing grapes on yucca spears for the Scott's Orioles.

Black-Headed Grosbeaks also also are bringing their young to feeders, but they are looking for seeds, especially seeds in the shell,which they can crack open with their strong bills. While the adults chirp cheerfully while feeding, the youngsters beg incessantly for their parents to bring them a worm or a seed.

Most warblers have migrated on, but wrens still are singing. The volume of their beautiful songs belies their small size. Bewick's Wrens' chirping trills can be heard in many suburbs. And, if you're hiking near the Santa Monica Mountains in the evening, listen for the lovely cascading trill of the Canyon Wren.

If you're a fan of the Bald Eagle nest cameras on YouTube, hang on to your mouse, because the young raptors are flying or about to fly. It's always exciting when chicks you have watched since their eggs were laid, start to spread those big wings and think about taking to the air. And it's a little sad to say goodbye forever to a chick that, over four or five months, has become part of your life. 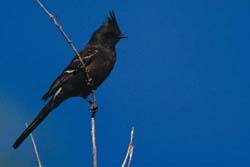 A brilliantly shiny black coat and red eye below an erect pointed crest mark the Phainopepla (Greek for “beautiful coat”), which moves from the desert to the coast for a second nesting. Though they are on the hunt for insects when they're here, they happily eat and digest mistletoe berries in the fall and winter, spreading their seeds.

Left: A Phainopepla perches on a slim twig

Hummingbirds still are nesting, possibly on their second or third clutch. They will continue to nest all summer, so don't trim any bushes or trees until fall, when all the nesting is finished.

Least Terns are fledging their young in June. There is an established breeding colony in the Marina del Rey area, where you may see both adults and juveniles. These smallish (9 inches) terns have yellow legs and bills with black markings on the head around a white forehead. The nests are just hollows in the sand, so they nest only where they are protected, such as a sandy island or an area surrounded by a fence. Juveniles have black beaks, and black-and-gray chevrons on their backs.

The last of the bachelor mockingbirds still can be heard singing, sometimes all night. While they didn't pair up this spring, there's always next year.

Right on time, as our water restrictions really kick in, June is Perennial Garden Month. That make this month a good time to plant some of those perennial native bushes and flowers that need very little water. The Theodore Payne Society is a prime Southern California resource for native plants, especially those that attract birds. Check out their web site for design inspirations and a guide to bird-friendly native plants. Though our tend to dry up in the summer, it's also National Rivers Month,